Read about how CHLA was the spark to a wonderful romance for two nurses who put patients first! 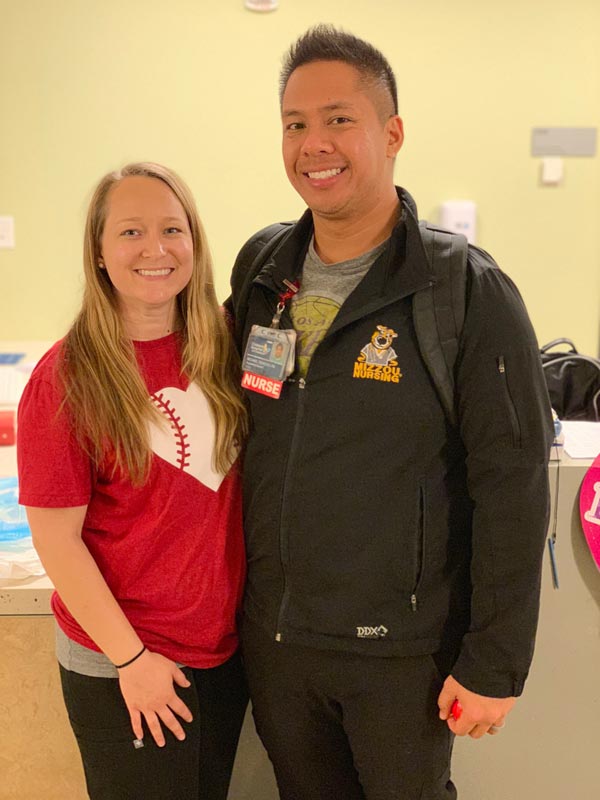 For two nurses who put patients first, CHLA was the spark to a wonderful romance. Erin Hollenbeck Trinidad remembers the first time she saw her husband, Michael Trinidad.

The year was 2012, and the two of them were fresh-out-of-nursing-school novices in the Versant™ RN Residency Program at Children's Hospital Los Angeles. From the first rotation in March, she noticed he had a way with patients that was unlike anything she'd ever seen: quiet, calming, reassuring, strong.

Michael, in turn, remembers being "blown away" by Erin's empathy.

"She has this fundamental ability to put herself in the shoes of the patient, or his or her family, and relate to everything they're going through," he says. "She helps make things less scary. She builds a real connection. It makes a huge difference for patients and their families."

The two were just friends back then, but they started dating when the residency ended that October. After multiple jobs, thousands of hours of commute time and countless life-changing experiences with patients, the two got married on Oct. 27, 2018. Today they work together as registered nurses on the night shift in CHLA's Cardiothoracic Intensive Care Unit (CTICU).

Michael and Erin came to their jobs through vastly different paths. Prior to participating in the RN Residency Program, Michael, 33, had worked for about a year as a care partner on 5 West, the acute medical unit for general pediatrics, infectious diseases, pulmonary conditions, and endocrine and metabolic disorders such as rheumatology and diabetes. When the 22-week residency finished, he returned to 5 West. Afterward, he transferred into the CTICU. His thinking? He wanted a new challenge-and he got one.

"The kids we take care of in the CTICU are really sick," he says. "It's important that we watch them and assess them closely and do our best to maintain them. We can do any intervention at any moment. You can talk to the doctors about anything-the physiology of a certain patient or why you're seeing certain markers for an issue. Learning never stops in the cardiac ICU. That's what drew me toward it in the first place."

Meanwhile, Erin's route was far more circuitous. Upon finishing her residency, she went to work in the Newborn and Infant Critical Care Unit (NICCU), and in 2015, around the time Michael moved into the CTICU, she left CHLA to take on work as a travel nurse. Over the course of nearly two years, Erin, 29, worked in the U.S. Virgin Islands, Seattle, San Francisco, and Eugene, Oregon, to name just a few stints. She appreciated the extra cash and the experience of working different shifts in different hospitals around the country, but she longed to return to the positive and supportive environment of CHLA.

"Working in all those different children's hospitals made me realize how much I wanted to come home," she says. "There's something special about CHLA you can't really find anywhere else."

In 2017, when Erin was ready to return to Los Angeles, the only opening was in the CTICU-where Michael was already established. The two of them joined forces at work. They joined forces in life shortly thereafter.

Today, the two work the night shift and commute together 90 minutes each way from their home in Huntington Beach. Some of their daily duties include hanging fluids, administering baths, conducting assessments and running labs. Night nurses also do what they can to minimize interruptions so patients and their family members can get a good night's sleep.

Erin and Michael say they're grateful for the opportunity to work side by side.

"We support each other, we're there for each other, and it's special to go through the ups and downs of nursing with someone who just gets it," Erin says. "This job isn't just about the pathophysiology of particular cases; it's about emotions, too-hard, big and complicated emotions. It's always nice to have your sounding board be someone you love."